The important thing is not to be afraid


13th day of the protests

“People are a bit tired, after having protested for so many days”, “It’s Friday evening, maybe there are some other events people are more willing to go to”. These were some of the explanations for the lack of protesters, as only about 100 people gathered on the 13th day of the protests. However, the idea shared by most of the protesters was that this low number was not significant. What they considered hugely important was that people would gather on Sunday evening, for another huge protest, everybody was saying.

An old lady who was staying a bit isolated from the crowd told me that she thought that the strategy of the protesters was wrong, as people were gathered too far away from the boulevard. “People should stay closer to the street and shout at the cars passing by, or the people passing by. They need to send their message to those who are not part of the protest, not shout to each other their messages.”
I saw the old lady the night before, while gathered at the metro station, because of the rain. She showed me an album she was carrying around every night, with pictures taken during the Romanian Revolution in 1989 by the French photographer Jean-Louis Calderon who died during the revolution. While she was showing me the pictures, people stopped by to look at them.

She told me she also took part at the Romanian Revolution in 1989. She was coming every night, after work, in front of Hotel Intercontinental together with her kids, an 11- month old girl, who was playing with her bucket in sand, in front of the hotel, among the protesters, and a 9-year old boy.

I asked her if she was coming alone at these protests and she said that sometimes her husband comes along, but sometimes she just comes alone. “I’m not afraid, she said, the most important thing is not to be afraid. I mean, if you are afraid, there is no point in coming here.” 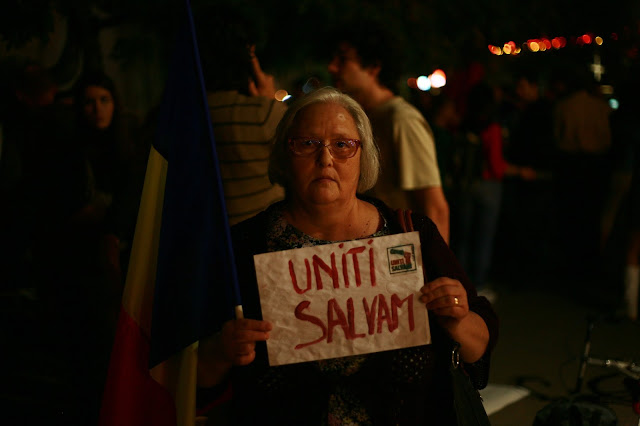 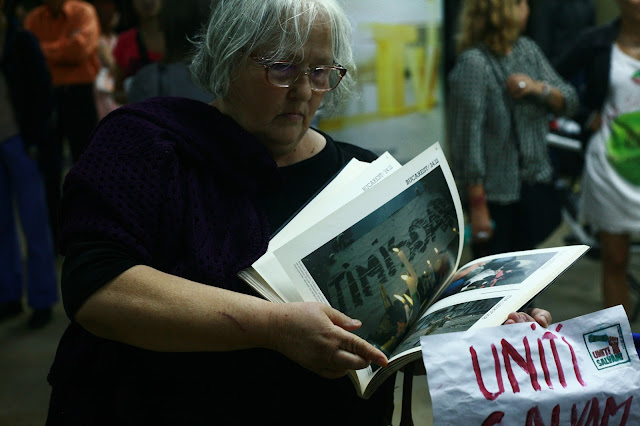